How to create a cross-platform application: a complete guide

According to Statista, the number of downloads on Google Play and the App Store has increased reaching 36.2 billion in Q4 2021. Apps are a necessity nowadays, nevertheless, there is always the question of whether to make an app for each platform separately (native) or one that works for all (cross-platform). 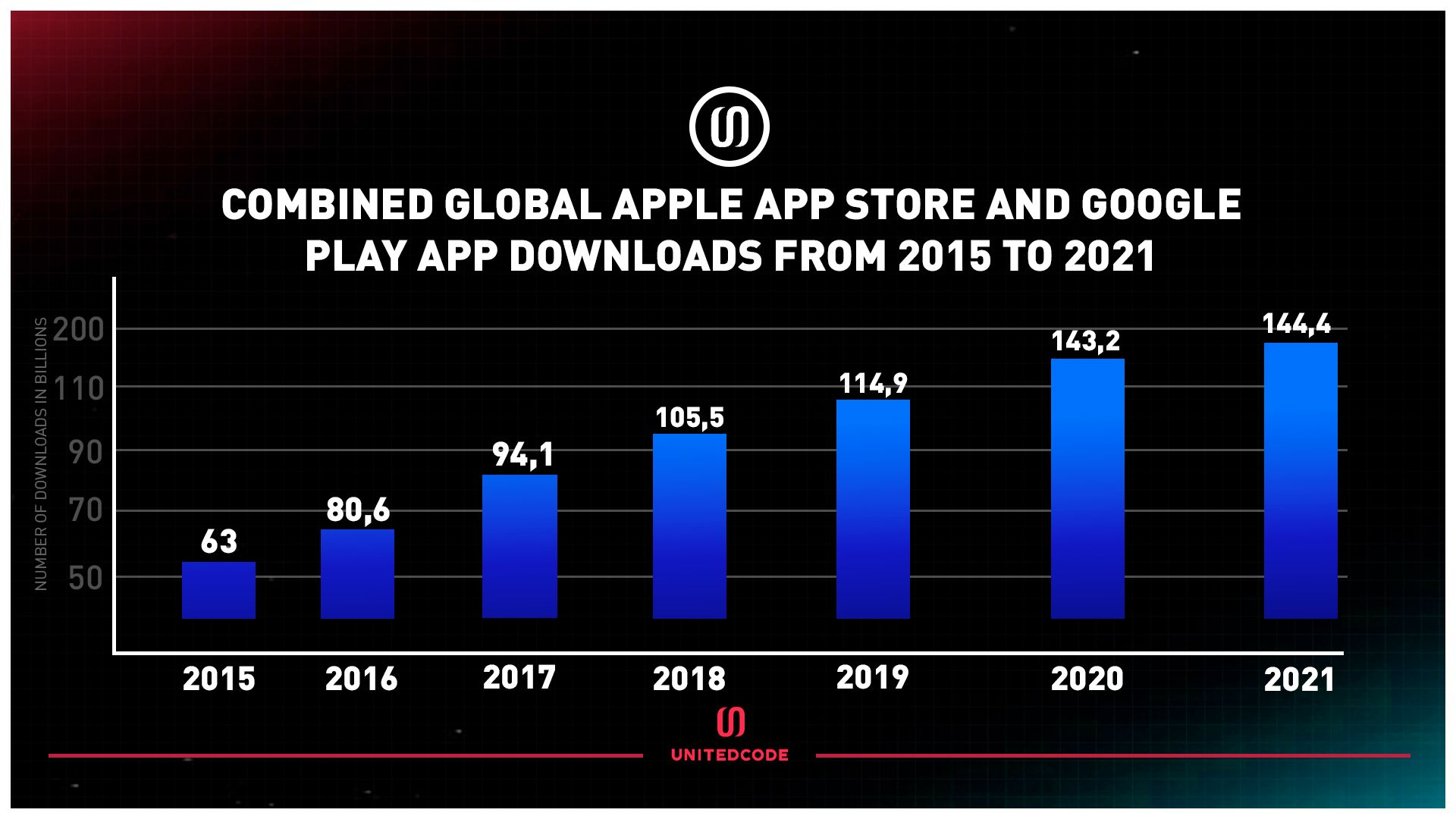 If you choose native development, you will have to support at least two platforms separately. This can lead to difficulties from both the financial side as well as from development and further support aspect. For example, if you need to introduce a correction or an additional feature into the software, the native version will require twice as much time for debugging and updating, because we are dealing with two fundamentally different instances of code. This is a significant pain point for business, considering that QA and updates are integral parts of any development process.

A solution to this problem is the implementation of different development approaches with a single code base. For example, you can use the Progressive Web App (PWA) technology or stick to cross-platform app development. You may read more on PWA and its benefits here while in this article, we’ll analyze what cross-platform applications are, what is the difference between cross-platform and native software, why businesses need them, how to develop them, and how much do they cost. 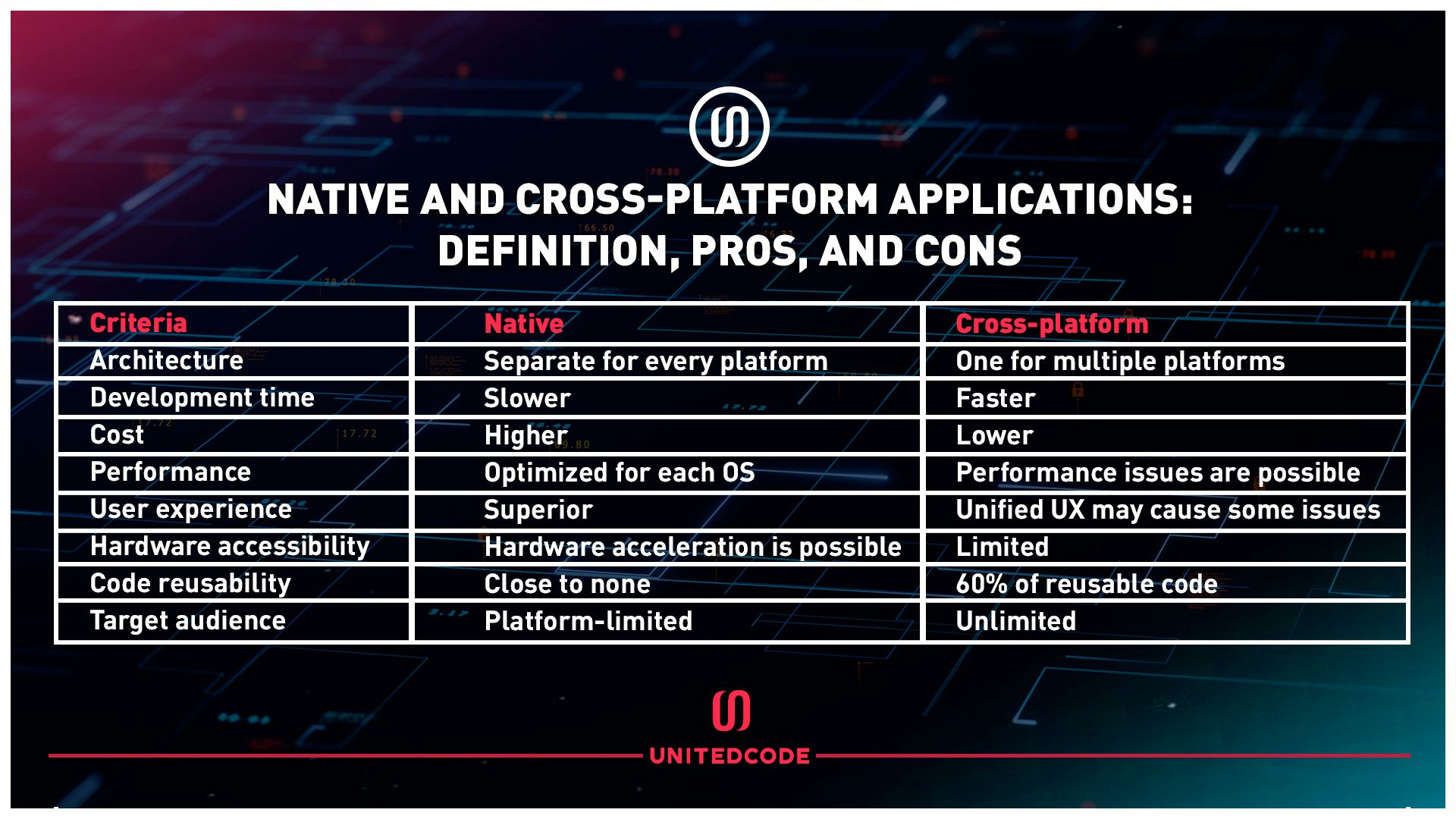 Table of differences between Native and Cross-platform application

In native development, specialists create a mobile application separately for each platform. Developers use the appropriate original languages (Swift for iOS, Kotlin for Android) and the tools of a particular operating system.

An example of a well-known native application is Instagram. Meta’s decision to use a native development approach was due to the high load of the application. It uses the hardware acceleration of mobile devices to process a lot of different graphics and animations, as well as inbuilt graphic editors. The native approach in this case guarantees maximum performance and a seamless user experience.

Of course, users may not even notice the difference between native and cross-platform apps. Cross-platform software is designed in such a way that they are not visually or mechanically different from a native app.

There is no single correct answer because it all depends on the business challenges, the complexity of the project, and individual circumstances. However, we can give some useful recommendations. For example, a cross-platform approach will suit your company more if:

What to consider when choosing an approach to creating an app

Before answering this question, it is crucial to analyze your business. Consumer segments, the value of time and money resources, the desired depth of application integration with user devices, and clear long-term goals are the minimum on which your choice will depend.

If you know that the ratio of iOS and Android users among your customers is close to a 50/50 split, a cross-platform app that allows you to get your product on both platforms at once may be better.

The answer to this question determines the financial cost of the project. Of course, in terms of human resources spent on development (the number of hours and specialists, to put it simply), a cross-platform application seems to be a more profitable solution.

Native apps are capable of playing heavy graphics quickly and without loss of quality. Today's cross-platform solutions also allow for high performance in running the application, but on weak devices, the difference with a native solution can still be noticeable.

So, you already know the benefits of cross-platform applications. Now it's time to find out what technology stack you need to create this great software as well as get a glimpse of average developers’ rates in different regions. 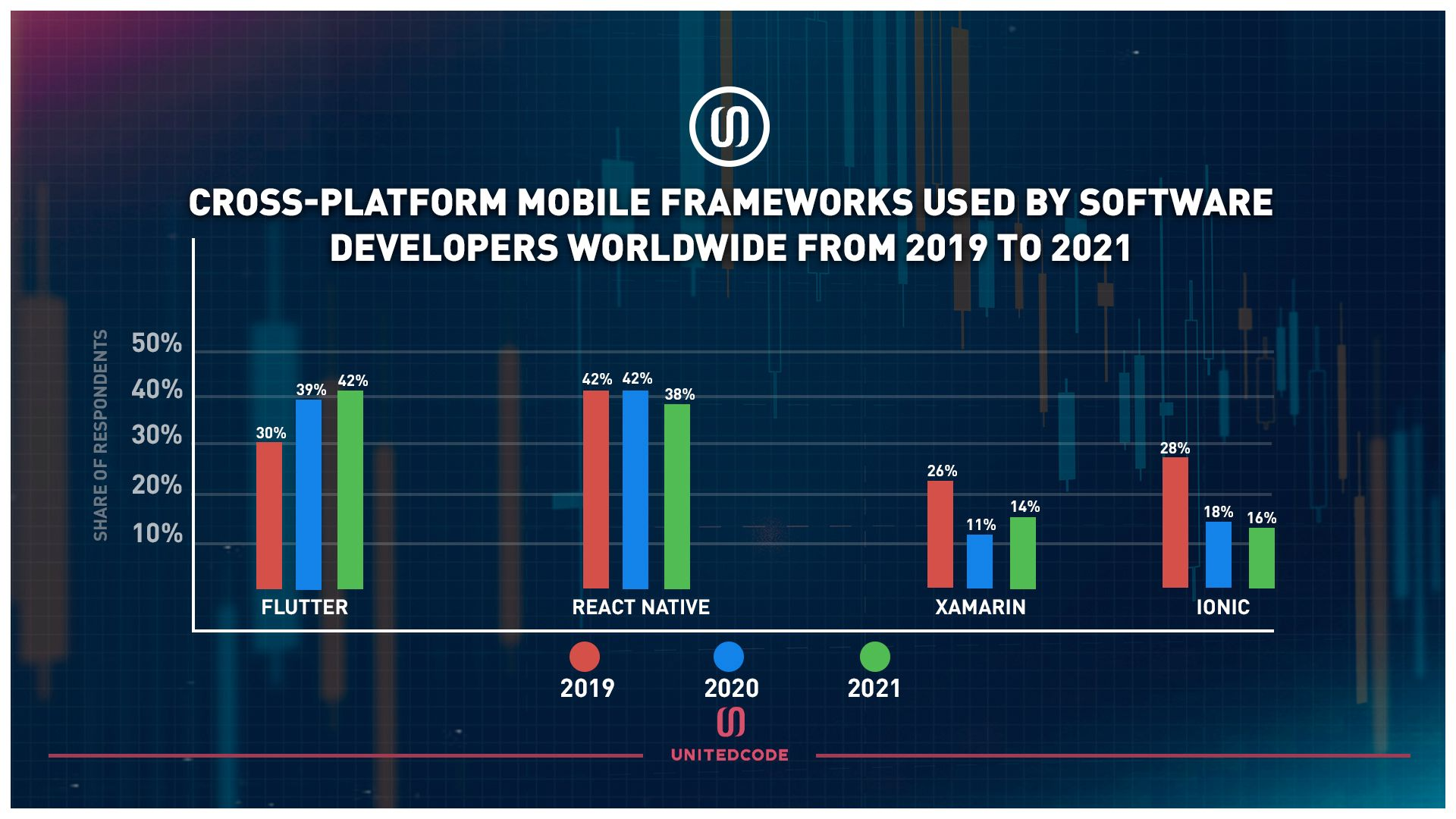 The language itself is very similar to Java. Transitioning to it is not too difficult for experienced Android developers who know Kotlin and Java. The framework's website has simple and straightforward documentation, so it's realistic to get to grips with.

With Flutter, a single UI is created (using a declarative approach) for both platforms. And there will be no restrictions on customizing native UI components.

React Native was created to bring React to mobile technology. And it has worked out really well. According to Bitrise statistics, React Native has a 13% market share. It's also used by over 500,000 repositories on GitHub.

A powerful and convenient tool for developing web applications. It is used by such giants as Google and YouTube.

Vue offers an adaptable ecosystem that can scale between a library and a full-featured framework.

This framework is great for creating huge web applications where data can change on a regular basis.

The framework is consonant with the name of the development company that was acquired in 2016 by Microsoft. It allows people who write in C# to enter mobile development. With the ability to combine cross-platform code with some of the native solutions when needed, the Xamarin project can provide a fully native user experience.

One of the most widely discussed frameworks. As the official website says, Ionic is an SDK for creating hybrid mobile applications, a set of CSS and JS components based on AngularJS, SASS, Apache Cordova. Drifty, whose product Ionic is based on, has already spent $3.7 million on Ionic, which demonstrates the potential of the tool.

The choice in favor of cross-platform or native development should be made based on a variety of conditions. Consider the goals and objectives of your business and the functionality you need. It is safer and more reliable to develop high-loaded large systems natively. Simpler projects can be safely implemented cross-platform. If before there were a lot of skeptics regarding the viability of this technology, time and market in which new frameworks have not just adapted, but gained popularity, only speak in favor of cross-platform.

The main thing to remember regardless of the approach, you need top-notch professionals. And UNITEDCODE will take care of all aspects of finding them. We provide a unique UNITEDCODE delivery service, during which we bring together teams of software developers from Eastern Europe and provide their services to you. In addition, we check the professional and communication skills of each engineer and help them to get into the project as efficiently as possible. Do not hesitate to contact us, because we work with a limited number of clients at a time.

Thank you for you submission!

We've received your message and will get back to you soon

By clicking “Accept All Cookies”, you agree to the storing of cookies on your device to enhance site navigation, analyze site usage, and assist in our marketing efforts.

Thank you for contacting us!
Your submission is received and we will contact you

We would love to find out how we can help you. Choose the best way to contact us.